The Selected Poetry of Dan Pagis 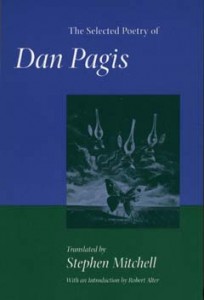 A survivor of the Nazi concentration camps, where he spent three years as an adolescent before escaping to Palestine in 1946, Dan Pagis testifies to the Holocaust, as he must, but he does so with a voice both disembodied by terror and charged with compassion for his persecutors. Pagis’s poems do not focus exclusively on the Holocaust, and his ability to range playfully from historical fact to science fiction is astonishing. Translated into meticulous and superb English by Stephen Mitchell, Pagis’s wild imaginings and insights into human existence seem both familiar and hauntingly inescapable.

Written in Pencil in the Sealed Railway-Car

The data in the glass beaker: a dozen scorpions
of various species — a swarming, compromising
society of egalitarians. Trampling and trampled upon.
Now the experiment: an inquisitive creator blows
the poison gas inside
and immediately
each one is alone in the world,
raised on its tail, stiff, begging the glass wall
for one more moment.
The sting is already superfluous;
the pincers do not understand;
the straw body waits for the final shudder.
Far away, in the dust, the sinister angels
are startled. It’s only an experiment. An experiment. Not a judgment
of poison for poison.

I too, like all the apes in the neighborhood,
grumble from branch to branch:
the past age, which was filled with sun, has passed.
Now it’s cold. The nuts are too hard.
The carnivores are getting more and more supple.

This is it, I’m emigrating. Good-bye.

Hey, what’s happening,
my tongue’s tied in knots,
my shoulders, where are my shoulders,
suddenly I’ve got stature,
erectness,
suddenly I’m threatened with
what, a high brow!
Bulbs, flickering bulbs.

How good this silence is. I’m almost, almost perfected.
I pick out an attractive suit,
get dressed,
light up a cigarette, slowly,
and sit down with the stopwatch, my only friend,
beside the table, in perfect readiness
for the invention of chess.

The Caveman Is Not about to Talk

At time’s tail end, my great-grandchildren’s great-
Grandchildren pause,
My skull in hand, and try to calculate
The centuries I ground between my jaws.

And what news of the mammoth will they wrest
From my laconic mouth? I’ve got time:
I’m not about to talk. They haven’t guessed
My profile, even. Fine,

Let them enjoy the bones that I bequeath
In a clump of dust. But if they looked beneath:
Here I am,

Still in my cave, complexion like a baby’s,
Pink and soft and wonderfully at case,
Never expelled from Mama’s cozy womb.

A Lesson in Observation

Pay close attention: the world that appears now
at zero-point-zero-one degrees
was, as far as is known,
the only one that burst out of the silence.

It hovered within a blue bubble, fairly large;
and sometimes there were clouds, sea breezes,
sometimes a house, perhaps a kite, children,
and here and there an angel,
or a garden, or a town.
Beneath these were the dead, beneath them
rock, beneath this the fiery prison.

Is that clear? I will repeat: outside there were
clouds, screams, air-to-air missiles,
fire in the fields, memory.
Far beneath these, there were houses, children.
What else?

The little dot on the side? It seems to be
the only moon of that world.
It blew itself out even before this.

Soon I will have to begin. All around me
moons have lit up. Have burned.
I am receiving a different light, perhaps from inside,
like a dim streetlamp
in a city park I once beard of.
And I try to imagine: a city. How was a city possible,
for example? What were the prerequisites
for a tree? For the growth of a bench? For a child?

Now to take off.
There is no time left.
I am preparing myself
to hover over the face of the non-abyss
into my body and onward

“If I am not mistaken:
the lightning that disappeared
only now pierces
the eye.
The air that has taken the place
of the severed hand hurts
the cripple.”

— No, that is not right. Memory is not there.
What you said is only a parable.
But you, my servant, you
must be precise. I expected more from you.
It doesn’t matter. Do not fear, my servant. You will not fail.
Think. Think again, well, and answer me:
Where is memory?
Who has pierced?
What was severed?

Dan Pagis’s poems have been through the fire — its heat, its suffering, and its refinement. They ring clear as crystal. Each like a cherished glass permits Pagis to toast the human spirit.
— Sharon Dunn, The Massachusetts Review

Pagis was one of the most vibrant voices in modern Israeli poetry. Mitchell creates supple, luminous renditions.
— Publisher’s Weekly

One has to remind oneself that this is a translated text, because the poems are made so powerfully available to the English-speaking reader. I don’t know any Hebrew… But knowing English is enough to know that Stephen Mitchell’s translation is one of those exceedingly rare examples of rendered poems that are poems in their own right. Mitchell’s English captures all sorts of verbal complexities; you can bear down on these poems, and they don’t give way to the excuse that, after all, they are only translations.
— Charles Berger, Raritan

The poems glow with pleasure in themselves. One can hear a kind of laughter resonating, as if having surpassed the moment and its trial, having presented suffering yet having set distance from it through the medium of his art. Though Dan Pagis has died too soon, may we learn from him to live.
— David Ignatow