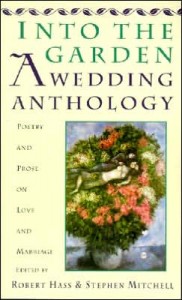 For every bride and groom who want to give their ceremony new depth and meaning, two noted poet-translators have gathered poems and prose, old and new, religious and nonreligious, that will make any wedding a richer experience.

In this wise and delight-filled book, Robert Hass, formerly poet laureate of the United States, and Stephen Mitchell have compiled a collection of poetry and prose that celebrates the mystery of love and the meaning of the marriage pledge. They have discovered some of the most beautiful and profound statements about love and marriage in the prayers and meditations of various cultures — Native American, old Chinese, Buddhist, Hindu, Christian; pieces by Biblical psalmists, Sufi mystics, and Zen sages; traditional European love poetry, and work by modern poets and essayists.

With an introduction by Robert Hass on the wedding ceremony as ritual and celebration, a chapter of longer selections on love and marriage for private reading, a chapter containing examples of wedding ceremonies from various American traditions, and a brief afterword by Stephen Mitchell about marriage as a spiritual practice, this anthology is a lasting treasure for all couples.

Everything that touches us, me and you,
takes us together like a violin’s bow,
which draws one voice out of two separate strings.
Upon what instrument are we two spanned?
And what musician holds us in his hand?
Oh sweetest song.

THE TWO OF YOU

Don’t run anymore. Quiet. How softly it rains
On the roofs of the city. How perfect
All things are. Now, for the two of you
Waking up in a royal bed by a garret window.
For a man and a woman. For one plant divided
Into masculine and feminine which longed for each other.
Yes, this is my gift to you. Above ashes
On a bitter, bitter earth. Above the subterranean
Echo of clamorings and vows. So that now at dawn
You must be attentive: the tilt of a head,
A hand with a comb, two faces in a mirror
Are only forever once, even if unremembered,
So that you watch what is, though it fades away,
And are grateful every moment for your being.
Let that little park with greenish marble busts
In the pearl-gray light, under a summer drizzle,
Remain as it was when you opened the gate.
And the street of tall peeling porticoes
Which this love of yours suddenly transformed.

Czeslaw Milosz
translated by the author and Robert Hass

Wild Nights—Wild Nights!
Were I with thee
Wild Nights should be
Our luxury!

Of all the Souls that stand create—
I have elected—One—
When Sense from Spirit—files away—
And Subterfuge—is done—
When that which is—and that which was—
Apart—intrinsic—stand—
And this brief Drama in the flesh—
Is shifted—like a Sand—
When Figures show their royal Front—
And Mists—are carved away,
Behold the Atom—I preferred—
To all the lists of Clay!

AT THE WEDDING MARCH

God with honour hang your head,
Groom, and grace you, bride, your bed
With lissome scions, sweet scions,
Out of hallowed bodies bred.

Then let the March tread our ears:
I to him turn with tears
Who to wedlock, his wonder wedlock,
Déals tríumph and immortal years.

“Scion” means, literally, “twig, offshoot.” In reading the poem aloud, you might want to change this line to: “with lissome daughters, sweet sons.” Or if children aren’t a concern: “with lissome beauty, sweet joy.”

Do not fear to put thy feet
Naked in the river sweet;
Think not leech, or newt, or toad
Will bite thy foot, when thou hast trod:
Nor let the water rising high
As thou wad’st in, make thee cry
And sob; but ever live with me
And not a wave shall trouble thee.

Now you will feel no rain,
for each of you will be a shelter to the other.

Now you will feel no cold,
for each of you will be warmth to the other.

Now you are two bodies,
but there is only one life before you.

Go now to your dwelling place,
to enter into your days together.

And may your days be good
and long on the earth.

I don’t love you as if you were the salt-rose, topaz
or arrow of carnations that propagate fire:
I love you as certain dark things are loved,
secretly, between the shadow and the soul.

I love you as the plant that doesn’t bloom and carries
hidden within itself the light of those flowers,
and thanks to your love, darkly in my body
lives the dense fragrance that rises from the earth.

I love you without knowing how, or when, or from where,
I love you simply, without problems or pride:
I love you in this way because I don’t know any other
way of loving

You that love Lovers,
this is your home. Welcome!

In the midst of making form, Love
made this form that melts form,
with love for the door, and
Soul, the vestibule.

Watch the dust grains moving
in the light near the window.

Their dance is our dance.

We rarely hear the inward music,
but we’re all dancing to it nevertheless,

directed by what teaches us,
the pure joy of the sun,
our Music Master.

Rumi
translated by Coleman Barks with A. J. Arberry

Jelaluddin Rumi (1207-1273) was a Sufi mystic and founder of the Mevlevi, the ecstatic dancing order known in the West as the Whirling Dervishes. In 1244 he met the wandering dervish Shams al-Din (“the Sun of Religion”) of Tabriz: an overwhelming experience which led Rumi into the depths of divine love. “With Shams,” Coleman Barks says, “he discovered the inner Friend, the soul, the Beloved, a constant reminder of God’s presence. However one might try to name that mystery, out of its love, joy, and longing came the poetry, the enormous Divani Shamsi Tabriz (42,000 lines) and the six volume Mathnawi. Rumi did not see the separate streams of different religions, but rather the ocean into which they were pouring. ‘I go into the Christian church,’ he said, ‘and the Jewish synagogue, and the Muslim mosque, and I see one altar.’”

“Kuan Tao-sheng (1262-1319) was famous not only as a poet,” Ling Chung writes, “but also as a calligrapher and painter. She was the wife of Chao Meng-fu, one of the most famous calligraphers and painters in Chinese history.”

WE TWO, HOW LONG WE WERE FOOL’D

We two, how long we were fool’d,
Now transmuted, we swiftly escape as Nature escapes,
We are Nature, long have we been absent, but now we return,
We become plants, trunks, foliage, roots, bark,
We are bedded in the ground, we are rocks,
We are oaks, we grow in the openings side by side,
We browse, we are two among the wild herds spontaneous as any,
We are two fishes swimming in the sea together,
We are what locust blossoms are, we drop scent around lanes mornings
and evenings,
We are also the coarse smut of beasts, vegetables, minerals,
We are two predatory hawks, we soar above and look down,
We are two resplendent suns, we it is who balance ourselves orbic
and stellar, we are as two comets,
We prowl fang’d and four-footed in the woods, we spring on prey,
We are two clouds forenoons and afternoons driving overhead,
We are seas mingling, we are two of those cheerful waves rolling over
each other and interwetting each other,
We are what the atmosphere is, transparent, receptive, pervious, impervious,
We are snow, rain, cold, darkness, we are each product and influence
of the globe,
We have circled and circled till we have arrived home again, we two,
We have voided all but freedom and all but our own joy.

from THE IMITATION OF CHRIST

Love is a great thing, a great good in every way; it alone lightens what is heavy, and leads smoothly over all roughness. For it carries a burden without being burdened, and makes every bitter thing sweet and tasty. Love wants to be lifted up, not held back by anything low. Love wants to be free, and far from all worldly desires, so that its inner vision may not be dimmed and good fortune bind it or misfortune cast it down. Nothing is sweeter than love; nothing stronger, nothing higher, nothing wider; nothing happier, nothing fuller, nothing better in heaven and earth; for love is born of God . . .

Love is quick, sincere, dutiful, joyous, and pleasant; brave, patient, faithful, prudent, serene, and vigorous; and it never seeks itself. For whenever we seek ourselves, we fall away from love. Love is watchful, humble, and upright; not weak, or frivolous, or directed toward vain things; temperate, pure, steady, calm, and alert in all the senses. Love is devoted and thankful to God, always trusting and hoping in him, even when it doesn’t taste his sweetness, for without pain no one can live in love.

This has been excerpted from a longer passage; see pages 141-142. In describing the devout Christian’s love of God, it also describes the love of a devoted husband or wife.

THE OWL AND THE PUSSY-CAT

It might be most fun if this poem is read by members of the wedding party together or in alternating stanzas.

from LETTERS TO A YOUNG POET

For one human being to love another human being: that is perhaps the most difficult task that has been entrusted to us, the ultimate task, the final test and proof, the work for which all other work is merely preparation. Loving does not at first mean merging, surrendering, and uniting with another person—it is a high inducement for the individual to ripen, to become something in himself, to become world, to become world in himself for the sake of another person; it is a great, demanding claim on him, something that chooses him and calls him to vast distances.

The passages on this and the next page have been excerpted from a longer statement on love; see pages 151-153. These deeply moving and often prophetic letters were written in 1904 by the poet whom many consider to be the greatest of the twentieth century.

from LETTERS TO A YOUNG POET

Someday there will be girls and women whose name will no longer mean the mere opposite of the male, but something in itself, something that makes one think not of any complement, but only of life and reality: the female human being.

This advance will transform the love experience, which is now filled with error, will change it from the ground up, and reshape it into a relationship that is meant to be between one human being and another, no longer one that flows from man to woman. And this more human love (which will fulfill itself with infinite consideration and gentleness, and kindness and clarity in binding and releasing) will resemble what we are now preparing painfully and with great struggle: the love that consists in this: that two solitudes protect and border and greet each other.

The first sentence in this selection, because it was written so long ago, may need revising when it is read aloud. You can say, “Now there are girls and women…” and change the tenses throughout.

The final sentence conveys a truth that Rilke felt deeply. In “Requiem for a Friend” he said it this way:

We need, in love, to practice only this:
letting each other go. For holding on
comes easily; we do not need to learn it.

Into the enormous sky flew
a whirlwind of blue-gray patches—
a flock of doves spiraling up
suddenly from the dovecotes.

And to see them makes you wish,
just as the wedding-feast is ending,
years of happiness for this couple,
flung onto the wind like doves.

Life too is only an instant,
only a dissolving of ourselves
into everyone,
as if we gave ourselves as gifts.

Only a wedding, only the depths
of a window and the sound rushing in,
only a song, or a dream,
only a blue-gray dove.