Ahead of All Parting 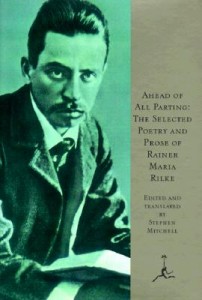 The Selected Poetry and Prose of Rainer Maria Rilke

The reputation of Rainer Maria Rilke has grown steadily since his death in 1926; today he is widely considered to be the greatest poet of the twentieth century. This edition presents Stephen Mitchell’s acclaimed translations of Rilke, which have won praise for their re-creation of the poet’s rich formal music and depth of thought. “If Rilke had written in English,” Denis Donoghue wrote in The New York Times Book Review, “he would have written in this English.” Ahead of All Parting is an abundant selection of Rilke’s lifework. It contains representative poems from his early collections The Book of Hours and The Book of Pictures; many selections from the revolutionary New Poems; the hitherto little-known “Requiem for a Friend”; and a generous selection of the late uncollected poems, which constitute some of his finest work. Included too are passages from Rilke’s influential novel, The Notebooks of Malte Laurids Brigge, and nine of his little-known, brilliant uncollected prose pieces. Finally, the book presents the poet’s two greatest masterpieces in their entirety: the Duino Elegies and The Sonnets to Orpheus.

Ahead of All Parting is a bilingual edition, with the English translation facing Rilke’s original German text.

As somewhere down in the ocean there must be mirrors, mirrors from the cabins of sunken ships, fragments of mirrors, which of course no longer contain anything: not the faces of the travelers, not one of their gestures; not the way they turned and looked so strangely awkward from the back; not the wall, not the corner where they slept; still less what swayingly shone in from there and outside; nothing, no. But as nevertheless a piece of seaweed perhaps, an open, sinking polyp, the sudden face of a fish, or even just the water itself, floating, parted, coming together again, evokes resemblances in those mirrors, distant, oblique, false, soon abandoned resemblances with what once existed —:

thus memories, fragments of memories, lie, broken-edged, in the dark at the bottom of her blood.

She paces back and forth around him, the lion, who is sick. Being sick doesn’t concern him and doesn’t diminish him; it just hems him in. The way he lies, his soft bent paws intentionless, his proud face heaped with a worn-out mane, his eyes no longer loaded, he is erected upon himself as a monument to his own sadness, just as he once (always beyond himself) was the exaggeration of his strength.

Now it still twitches here and there in his muscles, it tenses, here and there small spots of anger are forming, too distant from one another; the blood bursts angrily, with a leap, from the chambers of his heart, and certainly it still has its carefully tested turns of sudden decision when it rushes into the brain.

But he just lets things happen, because the end hasn’t yet come, and he no longer exerts any energy and no longer takes part. Only far off, as though held away from himself, he paints with the soft paintbrush of his tail, again and again, a small, semicircular gesture of indescribable disdain. And this takes place so significantly that the lioness stops and looks over: troubled, aroused, expectant.

But then she begins her pacing again, the desperate, ridiculous pacing of the sentinel, which falls back into the same tracks, again and again. She paces and paces, and sometimes her distracted mask appears, round and full, crossed out by the bars.

She moves the way clocks move. And on her face, as on a clock dial which someone shines a light onto at night, a strange, briefly shown hour stands: a terrifying hour, in which someone dies.

All this stood upon her and was the world
and stood upon her with all its fear and grace
as trees stand, growing straight up, imageless
yet wholly image, like the Ark of God,
and solemn, as if imposed upon a race.

And she endured it all: bore up under
the swift-as-flight, the fleeting, the far-gone,
the inconceivably vast, the still-to-learn,
serenely as a woman carrying water
moves with a full jug. Till in the midst of play,
transfiguring and preparing for the future,
the first white veil descended, gliding softly

over her opened face, almost opaque there,
never to he lifted off again, and somehow
giving to all her questions just one answer:
In you, who were a child once — in you.

Center of all centers, core of cores,
almond self-enclosed and growing sweet —
all this universe, to the furthest stars
and beyond them, is your flesh, your fruit.

Now you feel how nothing clings to you;
your vast shell reaches into endless space,
and there the rich, thick fluids rise and flow.
Illuminated in your infinite peace,

a billion stars go spinning through the night,
blazing high above your head.
But in you is the presence that
will be, when all the stars are dead.

SONNETS TO ORPHEUS I, 1

A tree ascended there. Oh pure transcendence!
Oh Orpheus sings! Oh tall tree in the ear!
And all things hushed. Yet even in that silence
a new beginning, beckoning, change appeared.

Creatures of stillness crowded from the bright
unbound forest, out of their lairs and nests;
and it was not from any dullness, not
from fear, that they were so quiet in themselves,

but from just listening. Bellow, roar, shriek
seemed small inside their hearts. And where there had been
at most a makeshift hut to receive the music,

a shelter nailed up out of their darkest longing,
with an entryway that shuddered in the wind —
you built a temple deep inside their hearing.

He calls it up. It shudders and begins.
What does? The Other; all that he is not
comes into being. And the whole being turns
a sudden face, far realer than he thought.

Magician, oh endure, endure, endure!
Make equilibrium. Stand upon one scale
with all you own, and let the far side bear
It, growing to decision or denial.

The spell takes hold. He knows the scales have tipped,
the call weighs heavier. Yet his face, as though
its hour-hand and minute- overlapped,
has stopped at midnight. He is spell-bound too.

That such a mission may become our mission,
how much obedience, how much joy.
Between our lines the earth is singing with us
and sweeps us on from noise to melody.

Or is it opposition that must drive
us to create a valid Thing?
Is love: a murderer without a knife?
And is the most endangered species: song?