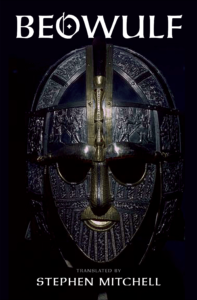 If the definition of a superhero is “someone who uses his special powers to fight evil,” then Beowulf is our first English superhero story, and arguably our best. It features not one, not two, but three monsters. It is also a deeply pious poem, so bold in its reverence for a virtuous pagan past that it teeters on the edge of heresy. From beginning to end, we feel we are in the hands of a master story-teller.

Stephen Mitchell’s marvelously clear and vivid rendering re-creates the robust masculine music of the original. It both hews closely to the Old English and captures its wild energy and vitality, not just as a deep “work of literature” but also as a rousing entertainment that can still stir our feelings and rivet our attention today, after more than a thousand years. This new translation—spare, sinuous, vigorous in its narration, and translucent in its poetry—makes a masterpiece accessible to everyone.

Grendel Arrives at the Palace

Then up from the moor, in a veil of mist,
Grendel came walking. He bore God’s wrath.
The evil brute intended to trap
and eat some human in the great hall.
Under the clouds he crept, until
he saw the mead-hall, glistening with gold.
It was not the first time he had called on the king,
but never in life did he find worse luck:
a fearless warrior waiting for him.
The creature, exiled from all man’s joys,
came to the hall; the heavy door,
though bound with iron, burst from its hinges
as soon as he touched it. He stood there, seething,
maddened with rage, then he ripped open
the hall’s mouth and hurried across
the patterned floor. From his fierce eyes
an evil light flared out like two flames.
He saw many men in the mead-hall, lying
together asleep, a group of young kinfolk,
and his heart laughed; before daylight
he intended to tear the life from each body
and devour the flesh in a gruesome feast.
It was not his fate, though, to feed on mankind
after that onslaught. Beowulf watched
to see where that savage killer would strike.
And the demon did not delay; in a flash
he lunged and seized a warrior sleeping,
tore him apart, gnawed bones, drank blood
gushing from veins, gorged on huge gobbets
of flesh, and soon had devoured the victim
utterly, even his hands and feet.
He strode to where Beowulf lay in bed
and grasped at him. But the hero’s grip
took his hand and tightened around it
as he leaned on one arm and sat up straight.
The evil creature instantly knew
that in no man he had ever met
on the whole earth had he encountered
a stronger hand-grip. His heart froze;
fear shook his bones, but he could not flee.
He longed to break loose, into the darkness,
and return to the tumult of demons. Never
in his whole life had he been greeted
as harshly as this. Then Hygelac’s kinsman
remembered his evening speech, stood up,
and grappled him close. Fingers cracked.
With his uttermost strength Grendel was straining
to pull away, but the warrior held him.
The foul thing thought that he might be able
to run from there to his dismal den,
but he felt his finger-bones being crushed
in Beowulf’s grip. A bitter journey
the ruthless marauder had made to the hall.
The king’s house rumbled. All around,
those who heard it were harrowed with fear.
Both huge wrestlers, raging, reeled
and crashed through the hall. Timbers clattered;
it was a wonder that Heorot withstood
the fight and did not fall to the ground,
that beautiful building; but smiths had forged
strong iron bands to brace its walls
both inside and out. Many mead-benches
with golden fittings were smashed to the floor,
so I have heard, as the two struggled.
Before this combat no counselor,
even the wisest, would have believed
that there was anybody on earth
who could destroy that splendid house
with its horn-trimmed fixtures, unless some fire
swallowed it in consuming flames.
An uncanny cry came through the walls.
Dread descended on every Dane
who was there to hear that horrible shriek–
God’s enemy singing his terror song,
a howl of defeat, hell’s prisoner
bewailing his wound. But he was held tight
by that mighty hero, the strongest man
who ever lived on the wide earth.
The noble warrior would not allow
his evil guest ever to leave;
he was convinced that the vicious thing
should be quickly killed. His comrades-in-arms
drew their ancient ancestral swords;
they wished to defend the famous captain,
their belovèd lord, however they could.
But they did not know, those noble retainers,
as they stepped forward to join the fray–
to strike the enemy from all sides
and cut him down–that the wicked creature
could not be wounded by any weapon;
no sword on earth, not even the finest,
could kill him, for he had cast a spell
to blunt all blades. But he was doomed
to be slain that night; his alien spirit
would journey far to the fiends’ realm.
Then he who had broken the hearts of so many
and inflicted such misery on mankind
with foul crimes in his fight against God
found that his body’s strength was failing.
Beowulf, that boldhearted man,
held his arm fast; hateful to each
was the life of the other. That loathsome thing
felt a pain-flash. A huge wound gaped
in his shoulder, sinews split, and muscles
burst from the bone. The victory
was granted to Beowulf. Grendel fled
with a mortal wound, under the moor-hills
to his joyless den. During that journey
he knew that his end was near, his hours
numbered. The dearest wish of all Danes
had been fulfilled in that deadly fight.
The warrior from far away,
that proud hero who had just purged
Hrothgar’s hall and saved it from evil,
gloried in the night’s great achievement;
he had kept his daring pledge to the Danes
and relieved them at last of their long torment,
the devastation they had endured,
the agony each had had to suffer.
And as a sign, the hero hung
Grendel’s whole arm—hand to shoulder—
from one of the rafters in the high roof.

“Mitchell’s version is eloquent and conveys a true sense of the original. In addition, his notes are a great enhancement.”
—Harold Bloom

“Stephen Mitchell comes as close to fulfilling the translator’s task as anyone at work today. He admirably balances two imperatives: to maintain fidelity to the text while rendering it available to the English we speak today. Mitchell’s reader-friendly version of Beowulf honors the narrative and will extend the readership for this foundational work of English literature.”
—David Lehman

“A most readable, energetic, and colorful translation of this savage epic. Mitchell’s sprightly, animated lines maintain the verbal torque and metrical vigor of the original, allowing both the gore of slaughter and the glory of heroic deeds to shine through more vividly than ever. An amazing achievement.”
—Billy Collins

“[Mitchell’s] rendering of Beowulf has much to offer—narrative momentum, clarity, a sense of the poem’s heroic verve, and a contemporary slant. The pathos of…the poem is captured through the elegant restraint of Mitchell’s own poetic language.”
—Times Literary Supplement