Duino Elegies and the Sonnets to Orpheus 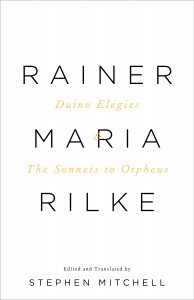 Rainer Maria Rilke is unquestionably the twentieth century’s most significant and compelling poet of romantic transformation and spiritual quest. His poems of ecstatic identification with the world have exerted a perennial fascination for contemporary readers. In Stephen Mitchell’s versions of Rilke’s two greatest masterpieces readers will discover an English rendering that captures the lyric intensity, fluency, and reach of his poetry. Mitchell adheres impeccably to Rilke’s text, to his formal music, and to the complexity of his thought; at the same time, his work has authority and power as poetry in its own right.

SONNETS TO ORPHEUS I, 2

And it was almost a girl and came to be
out of this single joy of song and lyre
and through her green veils shone forth radiantly
and made herself a bed inside my ear.

And slept there. And her sleep was everything:
the awesome trees, the distances I had felt
so deeply that I could touch them, meadows in spring:
all wonders that had ever seized my heart.

She slept the world. Singing god, how was that first
sleep so perfect that she had no desire
ever to wake? See: she arose and slept.

Where is her death now? Ah, will you discover
this theme before your song consumes itself?
Where is she vanishing? … A girl almost ….

SONNETS TO ORPHEUS I, 3

A god can do it. But will you tell me how
a man can enter through the lyre’s strings?
Our mind is split. And at the shadowed crossing
of heart-roads, there is no temple for Apollo.

Song, as you have taught it, is not desire,
not wooing any grace that can be achieved;
song is reality. Simple, for a god.
But when can we be real? When does he pour

the earth, the stars, into us? Young man,
it is not your loving, even if your mouth
was forced wide open by your own voice — learn

to forget that passionate music. It will end.
True singing is a different breath, about
nothing. A gust inside the god. A wind.

Be ahead of all parting, as though it already were
behind you, like the winter that has just gone by.
For among these winters there is one so endlessly winter
that only by wintering through it will your heart survive.

Be forever dead in Eurydice — more gladly arise
into the seamless life proclaimed in your song.
Here, in the realm of decline, among momentary days,
be the crystal cup that shattered even as it rang.

Be — and yet know the great void where all things begin,
the infinite source of your own most intense vibration,
so that, this once, you may give it your perfect assent.

To all that is used-up, and to all the muffled and dumb
creatures in the world’s full reserve, the unsayable sums,
joyfully add yourself, and cancel the count.

Silent friend of many distances, feel
how your breath enlarges all of space.
Let your presence ring out like a bell
into the night. What feeds upon your face

grows mighty from the nourishment thus offered.
Move through transformation, out and in.
What is the deepest loss that you have suffered?
If drinking is bitter, change yourself to wine.

In this immeasurable darkness, be the power
that rounds your senses in their magic ring,
the sense of their mysterious encounter.

And if the earthly no longer knows your name,
whisper to the silent earth: I’m flowing.
To the flashing water say: I am.

Who, if I cried out, would hear me among the angels’
Hierarchies? and even if one of them pressed me
suddenly against his heart: I would be consumed
in that overwhelming existence. For beauty is nothing
but the beginning of terror, which we still are just able to endure,
and we are so awed because it serenely disdains
to annihilate us. Every angel is terrifying.
And so I hold myself back and swallow the call-note
of my dark sobbing. Ah, whom can we ever turn to
in our need? Not angels, not humans,
and already the knowing animals are aware
that we are not really at home in
our interpreted world. Perhaps there remains for us
some tree on a hillside, which every day we can take
into our vision; there remains for us yesterday’s street
and the loyalty of a habit so much at ease
when it stayed with us that it moved in and never left.
Oh and night: there is night, when a wind full of infinite space
gnaws at our faces. Whom would it not remain for—that longed-after,
mildly disillusioning presence, which the solitary heart
so painfully meets. Is it any less difficult for lovers?
But they keep on using each other to hide their own fate.
Don’t you know yet? Fling the emptiness out of your arms
into the spaces we breathe; perhaps the birds
will feel the expanded air with more passionate flying.

Yes — the springtimes needed you. Often a star
was waiting for you to notice it. A wave rolled toward you
out of the distant past, or as you walked
under an open window, a violin
yielded itself to your hearing. All this was mission.

But could you accomplish it? Weren’t you always
Distracted by expectation, as if every event
Announced a beloved? (Where can you find a place
To keep her, with all the huge strange thoughts inside you
Going and coming and often staying all night.)
But when you feel longing, sing of women in love;
for their famous passion is still not immortal. Sing
of women abandoned and desolate (you envy them, almost)
who could love so much more purely than those who were gratified.
Begin again and again the never-attainable praising;
Remember: the hero lives on; even his downfall was
Merely a pretext for attaining his final birth.
But Nature, spent and exhausted, takes lovers back
Into herself, as if there were not enough strength
To create them a second time. Have you imagined
Gaspara Stampa intensely enough so that any girl
Deserted by her beloved might be inspired
By that fierce example of soaring, objectiess love
And might say to herself, “Perhaps I can be like her”?
Shouldn’t this most ancient of sufferings finally grow
more fruitful for us? Isn’t it time that we lovingly
freed ourselves from the beloved and, quivering, endured:
as the arrow endures the bowstring’s tension, so that
gathered in the snap of release it can he more than
itself. For there is no place where we can remain.

Voices. Voices. Listen, my heart, as only
saints have listened: until the gigantic call lifted them
off the ground; yet they kept on, impossibly,
kneeling and didn’t notice at all:
so complete was their listening. Not that you could endure
God’s voice — far from it. But listen to the voice of the wind
and the ceaseless message that forms itself out of silence.
It is murmuring toward you now from those who died young.
Didn’t their fate, whenever you stepped into a church
in Naples or Rome, quietly come to address you?
Or high up, some eulogy entrusted you with a mission,
As, last year, on the plaque in Santa Maria Formosa.
What they want of me is that I gently remove the appearance
Of injustice about their death — which at times
slightly hinders their souls from proceeding onward.

Of course, it is strange to inhabit the earth no longer,
To give up customs one barely had time to learn,
Not to see roses and other promising Things
In terms of a human future; no longer to be
What one was in infinitely anxious hands; to leave
Even one’s own first name behind, forgetting it
as easily as a child abandons a broken toy.
Strange to no longer desire one’s desires. Strange
to see meanings that clung together once, floating away
in every direction. And being dead is hard work
and full of retrieval before one can gradually feel
a trace of eternity. — Though the living are wrong to believe
in the too-sharp distinctions which they themselves have created.
Angels (they say) don’t know whether it is the living
they are moving among, or the dead. The eternal torrent
whirls all ages along in it, through both realms
forever, and their voices are drowned out in its thunderous roar.

In the end, those who were carried off early no longer need us:
they are weaned from earth’s sorrows and joys, as gently as children
outgrow the soft breasts of their mothers. But we, who do need
such great mysteries, we for whom grief is so often
the source of our spirit’s growth —: could we exist without them?
Is the legend meaningless that tells how, in the lament for Linus,
the daring first notes of song pierced through the barren numbness;
and then in the startled space which a youth as lovely as a god
had suddenly left forever, the Void felt for the first time
that harmony which now enraptures and comforts and helps us.

Stephen Mitchell’s translation of Rilke’s most demandingly difficult and loveliest work instantly makes every other rendering obsolete. No doubt about it, Rilke has at last found, in Mr. Mitchell’s version, the ideal poetics and the perfect translator.
—William Arrowsmith

The gifts Mr. Mitchell brought to his earlier book he also brings to this one — an eye for a strong line; a sympathetic tact that allows him to supply a word from what is only suggested or to swell one of Rilke’s almost subliminal, one-word metaphors into a whole English phrase; the ability to reproduce the tone of common speech in Rilke; a knack for ingeniously simple versions of certain crucial Rilkean terms; and the use of off-rhymes to solve the formal problems of translating these “conjugated” sonnets. At times, Mr. Mitchell’s versions actually enhance the original… This is a beautifully designed, elegant and spacious volume, and it is splendidly annotated.
—Michael Hofmann, The New York Times Book Review

Mitchell’s translation of the Duino Elegies — Rilke’s masterpiece — is the best that has been made…. Intensely readable, yet he has not simplified the ideas.
—Stephen Spender, The New York Review of Books

Stephen Mitchell’s translations are masterful re-creations of the original, giving both precise renderings of Rilke’s language and sensitive interpretations of his poetic intent.
–Library Journal

An undisputed masterpiece by one of the greatest modern poets, translated here by a master of translation.
–Village Voice Literary Supplement